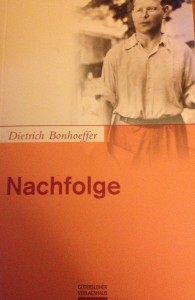 Translation is always an issue in biblical studies and even as I prepare my summaries for class, I realize that I often am too far from the original text, but when I take the time to translate word for word, I get jewels like this from Bonhoeffer: “Der Weg, der Jünger zum Gesetzt geht über das Kreuz Christi.” The law goes right through the cross of Christ, which is the way of the disciples. You can’t get to discipleship without going through the cross. You can’t get to cross without suffering. There is no cost or payment involved. Suffering is discipleship.