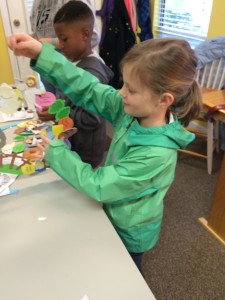 I felt bad rousing her sweet, sleepy self this early on Saturday, but we had a Missions Day. We had to pick up the breakfast and deliver it to both missions locations. I promised they would get a donut on the way, hoping that these wouldn’t be one of the things they remember later in life of being dragged from one place to another.

As we drive up and down 378, the list of places they’ve had to come along begins to form and guilt begins to wave over me. They have napped at church, through church, and during church. My hope is that all this church life and church work doesn’t turn them off of the church later in life, but instead is helping to teach them that life is about living together in community and helping those in need.

Our time with our girls isn’t as much as we ever want it to be, so on these weekends where we are running from one thing to another, it feels like we aren’t getting good time with them, but then I catch our 7 year old smiling as she is making crafts next to the kids from low- income apartments. They are both of them in their community.

They watch their dad grilling hamburgers and hot dogs off the back of his truck for a visiting youth group who has joined us in the missions work, giving his Saturday for service. I watch as they play with the son of the pastor of the church who uses our church building on Saturday mornings to worship, laughing and creating plastic food meals. They are being church together with lots of people on this Saturday morning. And I think maybe it isn’t so bad for them to come along for the work we are doing as a family who is trying to follow in the footsteps of Christ.