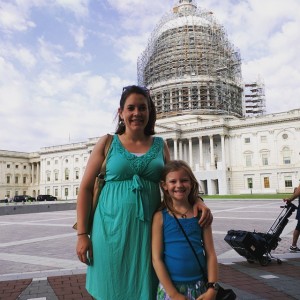 This summer, we got the opportunity to walk in Washington, DC with our girls. When I say we walked, we walked over 10 miles in a day as we went to the Air and Space Museum and the Natural History Museum and the National Museum of American History, toured the capital, and saw the Lincoln Memorial and the Vietnam Memorial. It was a great chance for us to spend time together with each other as a family, but also for us to remember that we live in a culture that is bigger than just Columbia, SC and remember that we are a part of a bigger culture and community as citizens of the United States of America.

Just by chance, we were there at the same time that we the Marriage Equality Act was passed. As we talked about it with our girls who are 7.5 and 5, we realized that this was a historic moment for us and for them, but in completely different ways. Sam and I would always remember the debates and discussion that lead to this act being brought before the Supreme  Court, but for the girls, it is different. They haven’t ever lived in a world where they don’t know kids who have same-sex parents, so as we tried to explain to them what the Supreme Court had decided, they looked confused. In their world, there are already families who are families with two moms or two dads. We explained that there were families that already existed, but there were other places where those families couldn’t be families across our country.

These are the moments for me as a parent where I realize that the world is changing because the world I knew growing up isn’t the world they now know. Their perspectives and their views will determine where the world will go, not mine.

And suddenly, the most important work I can do is to walk with them in Washington and as they grow up.