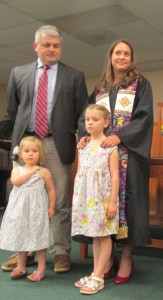 I look at this picture and see someone who was trying to prove herself as a pastor, as a wife, and as a stepmom. Over the past two years, I have settled into the realization that I don’t have to prove these aspects of who I am because they simply are. I am a pastor. I am a wife. I am a stepmom. I am a mom. There is no need to prove what is.

I also look at the changes that have taken place as MH has grown and changed, especially as she has learned to read and write, and now as she is a doting older sister to her half-brother. I wonder at how she is so sure that she likes Star Wars and spy gear and how she isn’t bothered if other people don’t like those things or think she should like those things. I look at LC and see how much she has grown into who she is as a person and how Kindergarten has captivated her imagination. I wonder at how she is unlocking the mystery of reading and now the mystery of not being the youngest, but being an older sister.

And then I look at the way the world is changing.

Maybe seeing the changes in the world is an aspect of life as parenting. Maybe inevitably, you wonder at how the world is going to be for your children. Maybe you can’t help but look at the world in which you grew up and think that it was easier for you than it will be for your children. Whether this is something that happens to everyone who is a parent or not, the world is changing. The sheer number of mass shootings is surely one way we know this is true. Public discourse has changed drastically with the immediacy and availability made possible by social media and internet access. Radical claims about how we treat people of different beliefs and different backgrounds than ourselves are receiving shouts of approval and those who are speaking out against this mindset are being escorted out and silenced.

As the reality of the world we live in sinks in, I realize that being ordained does not mean what it meant two years ago. Two years ago, as an ordained minister, there was no real concern that someone would come into a church bible study, and open fire. Two years ago the conversation about welcoming and affirming all people regardless of sexual orientation or ethnicity was seen as a way to represent the teachings of Jesus. Now, these teachings are shrouded by a growing number of Christians who want not only to exclude people who are different than they are, but who now want permission to harm those who are different than they are. The scariest part of this mindset is that those who hold these views are finding each other and finding a spokesperson in a presidential candidate.

Being ordained has always meant being set apart. Now being ordained, for me, means speaking out against these changes. This is not what Jesus taught and certainly not what it means to be a follower of Christ.

If the world has changed in these way, then it can continue to change as can our public discourse. In order for that to happen, those of us who believe that what we are seeing and hearing must not be the way our country is ruled or governed, must be roused out of our belief that this too shall pass and stand up and speak out. We must not live in fear of the unknown, but instead live in the reality of the world that we are now in: a world we can indeed transform if we are willing to change ourselves. To change ourselves, we must examine ourselves in relation to our world. Are we truly trying to make the world a better place or are we merely trying to make ourselves more comfortable by surrounding ourselves with people who believe the same thing we believe?

But the angel said to them, “Do not be afraid; for see—I am bringing you good news of great joy for all the people:

If we believe that God did become man and come to the earth, then the world we see needs the good news of great joy for ALL people even more today than it did two years ago or even perhaps two thousand years ago. Thanks be to God that the good news isn’t the news on our TV, Twitter feed, or Facebook feed.

For unto you is born this day in the city of David a Savior, who is the Messiah, the Lord.