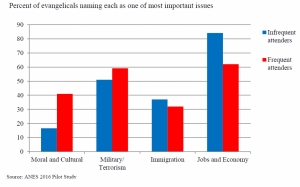 Where do we go from here?

We know the evangelical right played a critical role in the results of the election, but those claiming the identity of evangelical also share something else in common:

Or at least they didn’t in March of this year. We’ll have to wait to see if the election results changes that trend, but this isn’t surprising since church attendance and identification with a religious denominations has been on the decline and communities of faith have felt the impact of this trend in budgets, but could our communities of faith’s fear of addressing with hot button issues have contributed to the results of this presidential election? Could we have impacted the leadership of our country by addressing issues that are plaguing Americans rather than shying away in favor of safe, easy sermons? Could we have been more relevant in our teachings and in our ministries?

These are questions we will have to wrestle with as ministers and communities of faith as we desperately try to play catch up and regain our voice in the lives of millions of Americans who are now not only hurting, fearful, and angry, but are also divided into us vs. them.