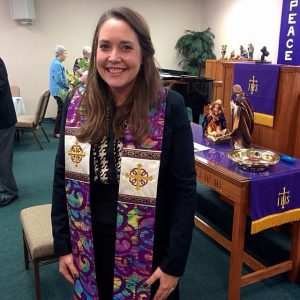 Today marks the fifth anniversary of my ordination, a mile marker I remember every year as there are so many women who have sought and fought for ordination for themselves and for generations of young baptist women that would follow them. Even more, I think it’s important to remember the women who are in traditions, even baptists traditions, where ordination is STILL not a possibility and who cannot in their context live into their calls.

As I reflect on the past five years, I am in awe that there are now three congregations who have called me as their pastor. Three congregations who have recognized the call I felt so strongly in a closet in Greenville, SC eight years ago. A call I was so scared and terrified to express because I knew once the words left my lips, there would be no turning back. A call that was an invitation to participate in God’s work here on earth through preaching and teaching and developing partnerships and singing in a homeless shelter in Columbia, SC and making crafts in summer enrichment programs and soliciting national companies to donate food to those who are food insecure and tiling floors and developing curriculum and remembering and reflecting and loving and praying and hoping and so much more.

There’s so much I couldn’t understand, but what I did understand in that small room on highway 378 when I sat with my ordination council was that most pastors, especially female pastors, don’t make it to the five-year anniversary of ministry. In fact, Fuller Theological Seminary estimates the attrition rate of ministers to be between 30-40% five years after being ordained. Although these numbers vary from denomination to denomination and depend on whether the minister holds the senior pastor position or an associate minister position, we know the rates of clergy burnout across the board are climbing.  The duties and responsibilities of clergy continue to increase as budgets continue to dwindle and criticism permeates through the pews. Clergy, even young clergy, suffer at higher and higher rates from obesity, hypertension, and depression. Research continues to reveal the nature of pastoral work creates an island of isolation. Pastors are constantly confided in but don’t often have an outlet to process the weight and burden of what they bear on behalf of their congregants. This creates a dangerous environment leading to burnout, depression, and even at times suicide at higher rates than other professions. The struggle against burnout, depression, and suicidal thoughts is even more difficult as preachers are upheld as lighthouses or hope; people who aren’t supposed to struggle with these things.

Even knowing all this about the current climate for pastors, I sat in that room looking at the people gathered for my ordination council and answered the question: “Where do you see yourself in five years?” by saying, “In parish ministry.”

I knew my call was to journey with God’s people. I knew my call was to preach in hope that people’s eyes would be opened to the Divine fingerprints that reveal God is with us, inviting to witness the mysterious transformations that surround us if we will but open our eyes.

My partner, Sam, delivered my ordination address five years ago and he said, “I told you not to do this” and we all laughed, but he was right. There is nothing about being called that has been easy. God has constantly asked me to step into the unknown, to challenge my own notions of the Divine, to introduce new possibilities to congregations and to follow after that still, small voice. Thanks be to God for the support and encouragement of a partner and a family who is with me every step of this crazy, called life.

I won’t pretend to know what the next five years hold, but I pray that I will have the strength and courage to continue to live a called life. A life that doesn’t always make sense, but always holds revelations of the Divine at work among us.