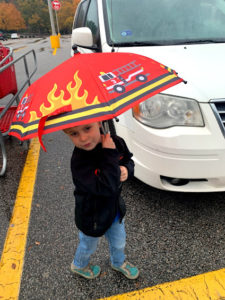 Yesterday, I was trying to do a quick grocery store run before the thunderstorms rolled in with our four-year-old and our 11-month-old in tow. I was convinced I had timed it just right. I talked our four-year-old son through the planning because he gets a little nervous during storms. We had a plan and we were going to work together to accomplish it.

We got to the dog food aisle when the first thunder boom hit. The four-year-old stopped in the middle of the aisle and declared, “Mom! We have to get home to be safe during the thunderstorm.”

My first reaction was one of joy. He believes and perceives our home to be safe, his sanctuary from all the learning and growing he is going through right now. My second reaction was one of dread because I knew what was coming. I was going to have to try to load up the groceries, two children, and myself in the midst of the rain.

After we checked out, I took a minute to stop and think through things because I knew as soon as we were in the midst of the rain, my brain would be trying to move as quickly as possible. I tried to put my raincoat on the 11-month-old who found it hilarious to play peek-a-boo with it. I got the four-year-old all set with his umbrella. I got my keys ready and we went for it.

There we were in the midst of the rain. One dry four-year-old finding all the puddles and stomping in them in no hurry because his umbrella had him covered. An 11-month-old playing peekaboo with the coat, her eyelashes catching the raindrops. and there I was already soaked when we were only halfway to the car.

In the midst of the rain, I found myself belly laughing at what we must look like. Two children laughing and splashing and one Mama soaked through trying to remember every moment.