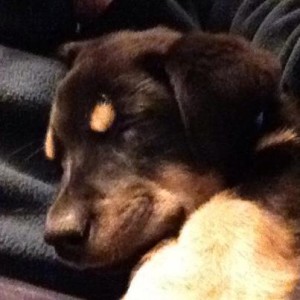 I never expected to be so changed by pet ownership, but after a weekend of waiting to pick up my newly adopted puppy, I found myself rushing to the Humane Society to pick him up. My nerves were on end as I waited for him to come out and to be able to finally take him home. He came home with a sensitive stomach after his neutering surgery and an antibiotic to fend of the “daycare cold,” he had come down with.

As he was exploring his need digs at home, he took a leap off the couch that caught his front left paw up under him. He stood up whimpering and limping. At this point, we had to decide whether we were going to go to the emergency vet and which one we were going to. We called and found out that most vets in town that were opened late weren’t accepting new patients, but we found one that would work us in.

We rushed there and as we waited, we realized that Willie was fine after all, so we didn’t even have to see the doctor. It was almost as if he was testing us to see if we were going to take care of him. Watching him wait and seeing him snuggle closer worried that he was going back to the shelter he came from or a similar place because the smells were similar at the emergency vet was almost too much for me. He was worried and anxious. He didn’t want to be left.

It’s amazing how you can bond with a puppy so quickly and that he can adapt so quickly to a new environment. I have no doubt there will be many more adventures ahead, I just hope they don’t all involve trips to the emergency vet at 11 pm!