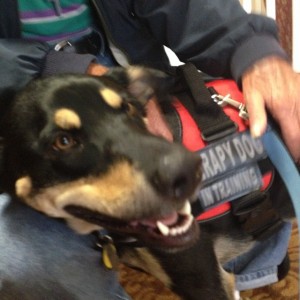 This week when we went to see Mr. Joe, he was sitting on the porch, which is where we usually find him. But there was a storm blowing in. Mr. Joe doesn’t see very well, but he would tell that Willie was not sitting down, and he could feel the wind and hear the thunder.

As we moved inside, Willie calmed down and started greeting the workers he knew. He also made sure to say another hello to the family who was sitting on the porch with us before moving inside. Willie has never been scared of thunderstorms, but he has always stuck pretty close to me during the storms. It must be something about the way the air smells that he can tell there’s something different and a potentially dangerous about thunderstorms that causes him to be a little extra attentive. It wasn’t surprising that he did the same thing for Mr. Joe on Thursday.

And I wonder if there isn’t more that I’m learning from these Therapy Thursdays than I planned on. In going and seeing the way that Willie can make people smile with his ears up and open mouth, I am learning that everyone wants to be seen, everyone wants to know that someone cares about them whether that being is 4-legged or 2-legged.