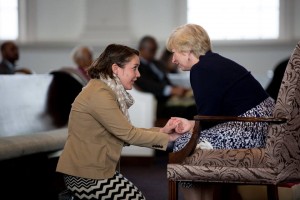 A week ago, I was privileged to attend Pam Durso’s ordination. As I sat there waiting in the silence for the service to begin, I realized this was the first ordination I had attended as an ordained minister, which brought my thoughts back to my ordination.

Although I had read about the ordination process before I was ordained, I didn’t realize how it wholly and completely changes how you see the world. I was trying to describe the phenomenon to a friend just this week and found myself fumbling through words trying to explain how you can walk into a room and feel the hurt and pain of people that you don’t necessarily know. You can detect things that you shouldn’t be able to detect in a human sense.

Many authors and ministers have described ordination as a weight or weightiness symbolized by the people who come and lay hands on you, and I agree there are times when what you feel is so heavy and so hard to comprehend that humans can treat humans as if they are nothing and worthless; and other times the stories that are shared confirm so completely that the divine is at work in the world around us that you are refreshed and renewed to your very core.

I never dreamed or imagined or planned that at 29 I would be an ordained minister nor that I would be pastoring a church. Creator God continues to create anew even calling someone who has been a minister for so long to ordination.

Blessings on you, dear Pam. The road will not be easy, but your eyes will be opened to new truths and new experiences with the divine. Being ordained is a life that we don’t choose, but when we let go of our choice, we see things others don’t.