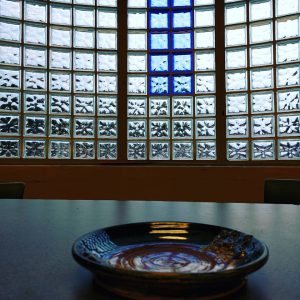 Yesterday as we worshipped at Transitions Homeless Shelter, we had more new people who had never worshipped with us than we’ve ever had. When someone new joins our community, there are always questions about who can or can’t take communion and since communion is a part of every service it is a point of discussion almost every week.

Again and again I’ve heard reflections from our community of their experiences being denied communion. The justification was they were not worthy, not in good standing with God, or had unconfessed sin before God. In most cases, the person denying communion was a minister who had judged their life to not be in good standing with God. This has happened so often that it has driven me to research the theological interpretations and traditions surrounding partaking of communion.

In the Protestant church, there are a variety of different beliefs and traditions associated with whom can partake of communion and how often communion is administered. Lutherans, Disciples or Christ, UCC, and Episcopalians all partake in communion weekly following the tradition found in the Catholic Church while Methodists, Baptists, and Presbyterians vary in how often they participate in the Lord’s Table. Just as some Protestants have taken on the traidtion in the Catholic church to partake in weekly communion so to have some denominations taken on the belief that no one who is engaged in grave sin or unconfessed sin should partake in communion. These grave sins are interpreted and expounded upon by church leadership creating a closed communion experience in these communities of faith. Other denominations who are welcoming and affirming of women, all races, members of the LGTBQ community, and to those who are seekers of faith and have not yet defined their faith identity, engage in open community meaning that all are welcome to God’s table regardless of race, gender, or sexuality.

As someone who was raised in a closed communion community of faith, it is important to me to specify in our worship with ministrieslab that God’s table is open to God’s people and God’s people are all who are created in the image of God. My sincere belief in open communion reflects my belief that my role as a minister is not to judge, classify, or exclude anyone who is seeking fellowship with God, but rather to encourage, challenge, and journey with God’s people.

I’ve seen too many people like the woman yesterday who said, “I’m following that bread around. Wherever that bread goes, I go,” who are hungry for the sustenance of fellowship, community, and yes the broken body of Christ to deny anyone a seat at God’s table.

May we all consider more deeply how our practices and traditions in our communities of faith have lasting impact on people who worship with even just once.