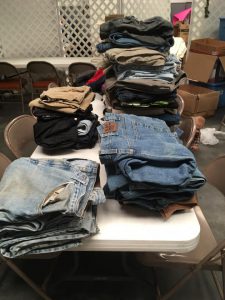 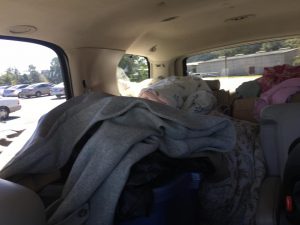 As I sat in the middle of a tarp filled with donations of men’s short-sleeved T-shirts and collared shirts on Saturday morning with our 11-month old, I was overwhelmed with the way a community can make a difference. There were so many winter items gathered in order to help those who might not have enough to stay warm through the cold. I was already overwhelmed by the generosity of the two communities of faith with whom ministrieslab had partnered in order to collect and sort items for the distribution. This, I thought, is church. Individuals, nonprofits, and communities of faith all coming together to help those in their own community who needed items to help them stay warm. This is the gospel. 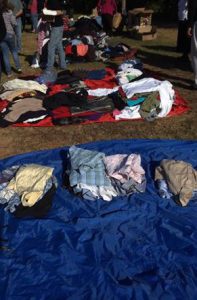 “Would you like a collared XL shirt as well?”

“No, thank you. I’ve got more than I need already and there are other people who need those.”

I looked in his hands and saw two pairs of socks, one pair of jeans, the black T-shirt, and a coat. More than he needs? He has plenty? My mind reeled as I took in what he was saying and what my privilege had assumed. I wanted to give him more, but he wanted to make sure that the people who would use and wear the collared shirts would be able to have those. He knew he wouldn’t use them, so he left them for someone else.

And I thought about how much I have, about how many times I’ve not even thought about other people who might need something I have more than me. And I was confronted with my privilege again.

As a woman who has pursued ministry, in particular preaching and pastoring ministry, I have fought against privilege and systemic discrimination. And as I have confronted and challenged that privilege by simply trying to answer my call, I have often thought there was no way I could have privilege, no way I could not understand those who are fighting the same battle I am fighting in different realms.

The work we have done with the homeless has humbled me, challenged me, and made me confront the reality that I have privilege that makes me want to give more to someone who thinks more about the community surrounding him than he does about how many clothes he has.