Yesterday, I was overwhelmed with the realization, “I have a baby.”

I know this sounds odd, but there are points that you are so nose to the grind of what needs to be done in the daily care of a mini human that you can’t ever remember a time that you didn’t have a baby. I would feel nervous sharing this with you except I have heard from so many other mother that this exact same sentiment washes over you at the strangest time. The realization that you are in a phase of life that you’ve thought about, but never knew what it would actually be like. The realization of the enormous weight and responsibility you are carrying as you nurture and guide a child.

For me that realization came yesterday afternoon as I was watching Ben have his snack. He was sitting in his high chair and I decided while he was content, I would clean out the cupboard and get rid of things that had accumulated that needed to be thrown out. Then I began to check expiration dates. Here’s what I found that had expired: 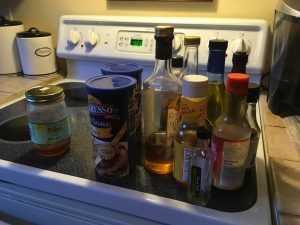 I was embarrassed. How had I let so much go by unnoticed? Why hadn’t the desire to clean out and check expirations dates washed over me sooner? Oh right, I have a baby.

I wanted to land squarely on that justification, but then I noticed I had doubles of things. Why in the world did I have two cans of breadcrumbs both of which that had been opened and both that were past their date? Because of the allure of the buy one, get one free. It’s why I had boxes of crackers (not expired!) that would probably go to waste (or let’s be honest, expire in my cupboard).

But it’s a good deal, I wanted to argue with myself. And it means I won’t have to put that item back on my grocery list for two weeks, I continued to reason with myself. Sure, but it also means that you have to store twice as much food, have twice as many choices, and have much less room because of all the repeat items.

But more than anything, my frustration with what this cleaning out episode revealed to me was that I had fallen prey to the “I Need More,” mantra that pervades our society. Didn’t I work every week with people who are in need? Didn’t I understand the privilege of having this much stuff? Didn’t I know by buying into the buy one get one free, I would eventually have to throw away way more food thus contributing to the overconsumption that plagues our society?

Not to mention, I have a baby. A baby who I want to raise with the profound truth that less is more. That we don’t need as much as we have and only when we acknowledge this can we start to bridge the great divide between the haves and the haves nots. A baby who I hope will understand that even if buy one get one free is a good deal, we only need one, even if our society and the marketing at the grocery store tells us otherwise.