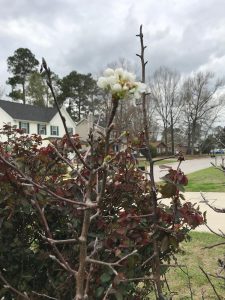 Three years ago during the Lenten Season, I felt such strong compassion for a bush in our yard that was being strangled by weeds. I could tell the weeds had so entangled this bush that the weed was literally taking the life from the bush. There were no blooms on the bush, but only dead limbs. I decided part of my Lenten practice was going to be to free that bush from the weed that was strangling it.

I am not a gardener. I do not have a green thumb, but I was determined. The weed was thorny and hardy. It didn’t come away from the bush easily. It put up a fight. In fact, it took me two sessions and numerous pricks in this bed to extract the weed from the bush. I watered this bush wanting so much for it to bloom. But it didn’t. I could see that there was life in the limbs again in the hints of green, but there were no blooms. The following Springs were the same, no blooms, but small pieces of evidence of life and growth.

I was disappointed. There were no Easter blooms. There were no butterflies that Spring to come to the butterfly bush. I was even more disappointed when I found out that what I had actually helped to resurrect wasn’t a butterfly bush at all, but rather a Bradford Pear tree that had been struck by lightning years ago. The tree had been removed, but the stump and roots remained.

My sweat and toil had accidentally resurrected a tree, not a bush. See I told you,  I am not a gardener. This accidental resurrection has been a running joke between me and Sam and the congregations I have pastored of my lack of gardening ability.

Yesterday as I pulled into the driveway, my breath caught. I spotted this white bloom. One bloom next to the rose bush we planted for our one year wedding anniversary. One bloom in the midst of a rainy and dreary day. One bloom after three years of no blooms. One bloom of hope in the midst of the darkness and wilderness of Lent.