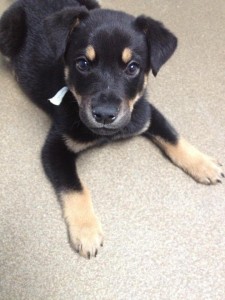 On Friday, I adopted this little guy from the Spartanburg Humane Society! I found him on their website and called three times the day before I could go to the Humane Society to make sure that he was still there. They told me that he was in isolation because he had a cold, so that I would have to visit him last when I came to not spread the virus.

I looked at the other puppies and almost adopted another Shepherd Mix. She was extremely shy and extremely cautious. When they brought Grover in, within the first three minutes, he had pooped on the bench and had gotten himself all tangled up in my purse. He had to be taken out of the room to get cleaned up.

When he came back, he was wheezing from his cold, but his tail was wagging wildly, and he was all over the place try to figure out his new surroundings. The only way that I got this picture was after about 15 minutes when he had worn himself out and needed to sit for a minute.

By the time I had to say goodbye, he was snuggled by my side with his right paw and head in my lap. He started whining when the volunteer had to take him back. I’ve never actually adopted a puppy. My family did growing up, but this was the first time my name was on the application!

I have to say, it’s been hard waiting for him. I’ve found myself making puppy cleaner for accidents that are inevitably coming soon and trying to think like a puppy, attempting to put things as high as I can.