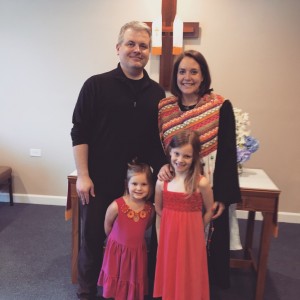 I grew up in a tradition where ministers wore suits and ties because they were all male. Pastors were considered to be CEOs and so it made sense that their professional attire would match that of the business world. This always bothered me, especially after experiencing worship communities in which the ministers were set apart in clerical collars, robes, or vestments. In these religious traditions, it didn’t matter if you were male or female what mattered is that you as an individual were cloaked or robed in order to serve as the representation of God to God’s people.

Just this week, I saw a minister with his daughter in target cloaked in a ministerial robe and clerical collar. I wanted to stop him and say, “Hey, I’m a minister, too! No, really I have my robe in  my car.” It’s true. My ministerial robe is currently housed in the backseat of my car, which our five-year-old noticed this weekend. She asked, “What’s this?” as she held up the garment bag draped across the backseat. I explained to her  it was my robe that I wear when I preach, the stole I received when I was ordained, and the handmade scapular I received after I had served Emmanuel for a year.

She looked at me and said, “Oh, so it’s kinda like Mommy’s doctor bag that she keeps just in case someone needs a doctor and because she goes to different hospitals.” I thought about that for a moment and realized yes, that’s exactly what it was like. How many times over the past two and half years have I found myself somewhere where I wished I had my robe to wear in order to more significantly signal that I was performed God’s work for God’s people? Perhaps there’s power in a roaming robe, just like in a traveling doctor’s bag. The power to offer hope and healing as we encounter need in our daily lives.