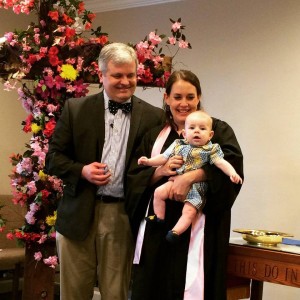 I relayed to Emmanuel this past week during our Easter celebration that Mary in John’s gospel account was in the same place. For years she had dedicated herself to being a disciple of Jesus, which was easy to define because Jesus was among them. He was literally walking among them, so following him meant walking with him, but once he died, none of Jesus’ disciples knew exactly what it meant to be a disciple anymore. How do you follow someone who no longer is walking among you?

Mary decided she was going to go to the place where she last saw Jesus: to his tomb, but what she found confused her even more. His body was not there and the stone had been rolled away. She ran to tell the other disciples what she had seen. And after the disciples saw and left the tomb, Mary let the emotion of what she had experienced and the grief over Jesus’ death engulf her and she stood at the edge of the tomb weeping. And again Mary is alone. She is alone with her grief, she is alone with her questions, she is alone. And she glances back into the tomb and with her tear-stained eyes, she saw two angels, these divine beings. And they asked her why she was weeping and she explained to them that she didn’t know where Jesus’ body was and with that statement what she was really saying was that she didn’t know what was going on or where to turn. Her whole life had been spent following Jesus and now what was she supposed to do when there wasn’t even a tomb holding the body of the one she had followed to visit or tend? She had nothing to do, but stand and stare.

In the midst of Mary’s confusion about what had happened and in her wondering what was next, there Jesus appeared to her, not as someone she recognized, but looking like a gardener, but when Jesus called her name, suddenly everything made sense. And because she is the first to witness the miracle, she is told to deliver the message to the other disciples.  And because she lingered alone, confused and frightened, she received an explanation for the empty tomb. And Mary, Mary alone who stood waiting and wondering at the tomb of Jesus  is the one who first sees and first hears from the Risen Christ.

Maybe it’s not in the certainty of the resurrected Christ, but in the uncertainty of what is going on and what’s going to happen next that we find Christ. Maybe it’s when we can’t find answers and when we aren’t sure about what we are seeing that Jesus enters the picture; a picture so confusing that we don’t even recognize him. And yes, maybe it’s when we are alone sobbing with grief, not understanding what we are seeing that we experience the Risen Christ.

Maybe in our moments of vulnerability, of uncertainty, of not knowing what happens next, comes new life, new hope, a new chapter.

In the midst of this transitional period, I’ve had many people tell me that I had done it wrong. “You aren’t supposed to resign before you know what the next step is,” they told me, but I felt strongly that God was asking me to step into the unknown because God knows that it is the most uncomfortable and vulnerable place for me.

I’m so thankful I have a partner who dares me to dream bigger and challenges me to see more and bigger than I ever would be able to see alone.

And by partner, I mean co-pastor!