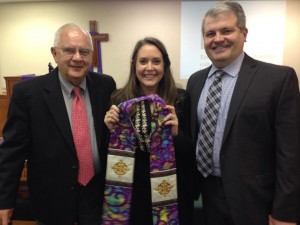 I was eating yogurt with one of my congregants who has a birthday this week. When I walked in she was helping out a young mom who was trying to wrestle two little girls and get yogurt at the same time. This led to a conversation about how we knew each other. When she discovered that I was the pastor, there was a palpable silence. Then she said,

Wait, it’s a baptist church and they let a girl be the pastor?

I nodded in the affirmative and smiled, but as I thought about this encounter later I realized I don’t think I will ever get used to 1) being called a girl 2) that I am, as a women preacher in the baptist world in the Bible Belt of the South, an enigma. She was not condescending, in fact, she was interested in finding out more about our church because she had grown up in a church that affirmed women in leadership roles, but had just moved to SC and found baptist church after baptist church that staunching opposed women in any types of leadership positions. Having not grown up in the baptist church, she didn’t understand that there were baptist churches that affirmed women.

And I know I’m not the only one. Ask any woman pastor, and I’ll bet she can tell you story after story of experiences she has had in the community where she is not considered a pastor even though she is serving as a pastor. It is so out of the experience of so many people in our communities, still, that once you find an affirming community that accepts who and calls you, you still have to muddle through the community’s perception and identification of who you are everyday.

The work we are doing in our churches and in our colleges to expand people’s understand of who is and who isn’t called to ministry is wonderful, but these experiences my fellow women in ministry have on a daily basis in the community means there’s a disconnect between what we are teaching and whether our communities know there are affirming and welcoming churches in our areas.

I won’t pretend to know how to bridge that disconnect just yet, but I hope the women we encountered yesterday will go to Charleston this weekend and share with her family her experience of meeting a woman pastor in the yogurt shop.