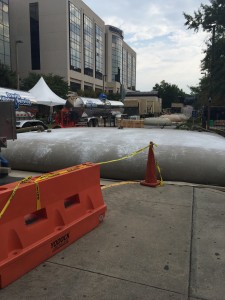 This morning I had my 36 week appointment with the doctor. I have certainly gotten used to the routine of going to the doctor, but today was significantly different. There were signs over all the sinks, “Do not use sinks.” There were signs over the water fountains, “Don’t drink this water.” And there was almost no parking because the picture above is what the hospital next to my doctor’s office looks like.

The National Guard is there as well as tractor trailers pumping water into the hospital because the hospital and entire Medical Park is still in a zip code where the water has not been cleared for consumption. My doctor explained her shock as she has come to the office in the past 10 days that she never thought that as an American doctor in the capital city of South Carolina she would ever be practicing without clean water and without being able to wash her hands with the water running from the tap.

I replied that it was a weird existence. I got lost twice trying to detour around road closures on the way to my appointment this morning. I haven’t been drinking as much water as I should for Baby H because it’s hard to remember to bring multiple bottles of water with you when you have been using water bottles and other containers that make it easier to carry more than one serving of water.

And yet, both us of relayed that in the midst of all the inconveniences we were very lucky to have sustained minor damage to household materials. It’s hard to express the frustration of this modified existence in the midst of other people’s devastation.

At the same time, it’s important for those of us who haven’t lost everything, but have lost the sense of security and safety of having clean water to be able to express that frustration without guilt. No, we aren’t saying that we can’t survive, but we are saying that we are concerned about finding clean water for our children to bathe in, to cook food in, and to drink for our growing babies. The mental capacity that it takes to reroute routines is an added stress for all of us living in the aftermath of the #SCflood and it’s not insignificant.

As we help those who have lost everything, we also need to be able to laugh, rant, grieve, and cry because this was not something we were planning for and this is something that has opens our eyes to how easily our lives can unravel.