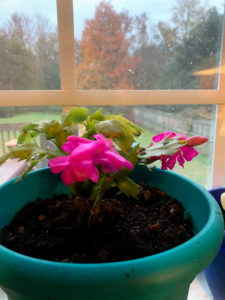 This weekend, the kids helped me repot our window plants. I have two window plants that live on the window over the kitchen sink looking out to our backyard. One is a Christmas Cactus and one is a budding African Violet. The Christmas Cactus started blooming right on time as the Advent season began. Most of the year, this plant rests dormant with very little to show until these vibrant blooms start to appear.

After we repotted the Christmas cactus and I returned it to its place on the window sill, I noticed that through the window our Bradford Pear tree’s leaves were flashing the last brilliant colors of life before it rested in the dark and cold of winter. This picture of hope blooming even as death waited behind was the perfect picture of this Advent season.

Hope and death rest together during this season. The short days and dark nights remind us of the short time we have here on earth. The changing leaves remind us that death does indeed bring new life. The blooms of this Christmas Cactus remind of the hope of the Divine incarnate, something we have been waiting all year to remember and something we still hope will come again.

Hope and death. Light and dark. Cold and warmth. All pressing against each other during this season of waiting for the Christ Child. May our eyes and hearts be open on this journey. 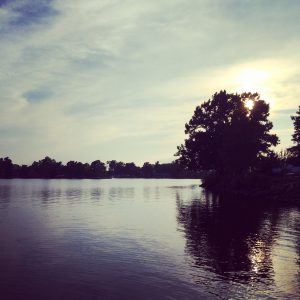 I don’t know how many time I’ve uttered the phrase, “I hope so” in the past, but I know it’s too many to count. But the importance of hope and finding hope didn’t really resonate deeply in my heart and mind until six weeks ago when our family went to see the ultrasound of our second baby, a secret we had been keeping quiet hoping to reveal to our community of faith and family and friends the excitement of new life in the midst of Eastertide when we all need a reminder that new life keeps showing up riding the waves of the resurrection. But what we hoped would be a time of celebration has become a season of grief, a sharp juxtaposition of almost life in the midst of Eastertide.

There was no heartbeat at the ultrasound, which would ultimately lead to our experiencing a miscarriage.

For me, this has been a deeply spiritual journey to discover what hope is. Dickinson’s words took on a new meaning as I realized, “Hope is a thing with feathers,” means that hope can simply float away without any warning rather than something “that perches in the soul.”

“Now faith is the confidence in what we hope for and assurance in what we do not see.” But did I still have faith in new life? Could I still hope when we wouldn’t see the life we had dreamed and envisioned when we found out we were pregnant?

And suddenly, I understood Sarai standing at the tent listening to strangers telling her what her life would. And certainly, I have laughed just like her.

Hope? Have you read the news? Have you been to the emergency room or noticed the number of people who are jobless, homeless, hungry? Hope? What’s that supposed to do about anything.

But as I’ve walked with this grief, I’ve come to understand that hope isn’t wishful thinking. Hope is a statement of belief of the revolutionary, life-transforming belief that God who has done the impossible will surprise again. God who overcame death and offered new life will revive again. God who created life out of dust will create again.

I don’t believe or hope in any specifics in regards to our family, but that God will still whisper and call me to create alongside of God. I believe and hope my eyes will open to see how pastoring a church named New Hope in the midst of deep grief isn’t just coincidence, but the divine presence walking beside us in the midst of the pain and suffering life brings. 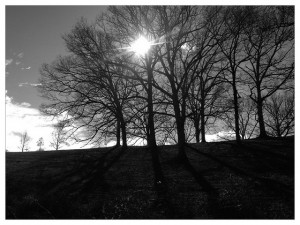 After four days of thunderstorms, the sun is out this morning. The storms brought a breeze I thought wouldn’t return to Columbia again until September after last week’s 90 + days. Last week was so hot even the grand magnolia trees were looking withered as they tried to pull up water from their deep roots.

As I looked at those magnolia trees towering above me last week, I thought of people who are trying desperately to hang on in the midst of the blazing sun of the wilderness; uncertainty surrounding them in the form of sickness, the unexpected loss of loved ones, and unsure job prospects. Like these magnolias, the wilderness sun was asking them to pull up every last ounce of hope from their deep roots of faith.

And then the rain came. The clouds opened up delivering hope in the form of water. The reminder of our baptism. A vase of flowers. A text message. An unexpected dinner that didn’t have to be cooked, planned, or prepared.

These unexpected thunderstorms providing rain at just the right moment is how the magnolia will survive through this hot Columbia summer. These moments where we realize someone has been thinking about us as we are traversing the blistering sun of the wilderness is how we will survive as people of God. These small acts showering us with the hope as they sustain and restore our souls. 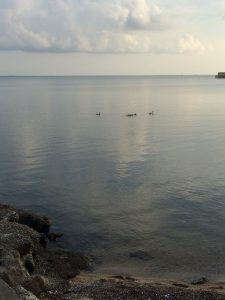 I didn’t grow up in a community of faith that observed the church calendar, so the different seasons we celebrate throughout the year are still fascinating to me. Right now we are in the season called Eastertide. I love the image of riding the wave of the joy and resurrection throughout the next fifty days.

As I’ve thought more about it, the realization has washed over me that the joy of the Resurrection wouldn’t be quite as joyful without the deep grief of the Crucifixion. And so the life of the disciple is the ebb and flow of grief and joy, doubt and hope, peace and uncertainty. Back and forth, ebbing and flowing, as we follow Jesus Christ.

May we not teach only the high tide of Christianity, but recognize that grief and doubt and uncertainty are part of the Easter story, too. Pain and suffering, joy and hope, all wound up together in Eastertide washing over us over the next fifty days.

I stepped out last week to share my wrestlings with the theology of depravity of humanity and offered instead the suggestion that perhaps we were created inherently good. As I have thought and read about total depravity, I have found that this theology is often taught in connection with biblical submission or the idea that men and women were inherently created different, each having a unique role. This belief often manifests in the practice of not ordaining women as deacons, ministers, or allowing women to preach or teach men.

The impact of these two theologies combine to impact women drastically. Total depravity teaches women that they are inherently flawed. Biblical submission teaches women that they are inherently lesser than men and are restricted in what they can and can’t do. The compound effect of these two theologies is a vast number of women who believe, “I am not good. I am not enough.”

As a baptist woman in minister, I have found it doesn’t really matter if you grew up in a community of faith who taught total depravity or biblical submission because the impact of these two theologies have now made their way into our culture. The result is women who believe they are broken and that they have to try to be good enough. The manifestation of this constant attempt to try to live up to standards that are based on these theologies is to attack other women and remind them that they are not good nor enough.

If you aren’t sure this is true, ask a woman minister who has been the loudest and fiercest in objecting to her answering her call to ministry. I can almost guarantee you, her answer will be other women. I’ve heard this story over and over again.

The recent campaigns to stop mommy wars is a good and important step, but until we uncover the heart of the matter of where the need and desire to shame and guilt each other begins, these efforts will only cover the surface.

How about I start?

I believe that you are godly and good in the very essence of who you are, not because of what you do or don’t do.

I was surprised to discover on Monday that Ben’s school was actually opened. For some reason, maybe because the girls were out of school and Sam had a rare day off work, I had just assumed his school would be closed as well. So, did I return him to his regular routine even as the rest of the family was still on holiday break or did we all exist in this alternate reality that is Christmas break for a while longer?

Back in the habit, sounds so much like back to the grind or back to work. These phrases that whisper of returning to something predictable and patterned. Isn’t it interesting how we crave the time off and then as soon as we have a couple of different days, we then beg for the consistent comfort of routine?

And all around me I see big life changes upsetting and rerouting routine: friends moving, 13 months old learning to walk, friends starting new jobs, or dealing with the aftermath of huge diagnoses. Is there really ever a consistent, predictable routine or do we just try to convince ourselves there is? When we do crave the routine, then are we really making change even harder when it inevitably creeps into our lives and turns everything upside down?

Perhaps in the changing dynamics of our families, society, and lives, there is something powerful about admitting the chaos that exists all around us. Perhaps when we can name the chaos, then we can also name divine breath that breathes into that chaos creating order in our midst. Perhaps when we step fully into the chaos, we are able to admit to the unknown: the unknown that our lives can change in a minute from death to life, chaos to order, with just one divine word.

Now we return you to your regularly scheduled programming.